What we say matters. A lot. 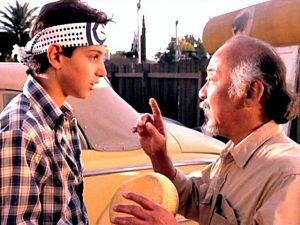 The science of instruction is evolving and the evidence is pointing away from conventional wisdom.
Internal cuing refers to cues that relate the the athletes body and the movement itself. Things like:

For many people, this type of cue works, but for those lacking motor control, asking them to feel a response in their bodies might not work. They’re not as in tune with where their bodies are in space, and won’t be able to use that feedback to dictate their movements.

External cuing refers to cues that relate to the goal of the movement and things external to the athlete. Examples include:

Drive the ground away
Explode off the ground
Jump for the ceiling
Crush the handle
Break the bar in half.
Wax on; Wax off

External cuing has been shown to have far greater retention than internal cuing. For athletes whose movement you are hoping to change beyond the clinic, think about how you might reword some of your cues and let the athlete figure it out for themselves a bit. It’s more likely to carry over to their performance.